Uncontrolled proliferation is a hallmark of cancer. In breast cancer, the most widely practiced method for comparing proliferation between tumor samples involves the immunohistochemical assessment of Ki67 antigen. Potential uses include prognosis, prediction of relative responsiveness or resistance to chemotherapy or endocrine therapy, estimation of residual risk in patients on standard therapy and as a dynamic biomarker of treatment efficacy in samples taken before, during, and after neoadjuvant therapy, particularly neoadjuvant endocrine therapy. Increasingly, Ki67 is measured in these scenarios for clinical research, including as a primary efficacy endpoint for clinical trials, and sometimes for clinical management.

In 2009, the International Ki67 in Breast Cancer Working Group (IKWG) was formed to address the problem of inter-laboratory inconsistency in Ki67 assessment. After a decade of gathering data, the IKWG has proposed a set of recommendations for preanalytical and analytical conditions for Ki67 assessment, as well as guidelines for interpretation, scoring, and related data handling [Nielsen et al. JNCI 2020].

Educational resources such as training module and scoring protocols, as well as literature updates from IKWG are available at https://www.ki67inbreastcancerwg.org/.

Beyond improved prognostic stratification, there is a need to find a more refined biomarker surrogate for patient survival than pCR alone. Therapeutic strategies that have led to significantly increased pCR rates to neoadjuvant treatments have not uniformly lead to significant survival benefits for patients. A composite clinical trial endpoint for neoadjuvant trials that encompasses both residual disease (RCB), as well as immune response to therapy may function as a better predictor of survival benefit.

To develop such a surrogate marker, we would require large randomized clinical trials collecting pCR status, RCB class, and TIL evaluation, alongside event-free and OS data, to understand how changes in these parameters correlate to survival. A more accurate short-term surrogate endpoint would be the Holy Grail for rapid and efficient drug development. The prognostic significance of residual disease TILs, as well as the value of early biopsy evaluating on-treatment TILs are also worthy of exploration in other cancer types, however the value of these biomarkers in predicting outcome may differ by cancer type and utilized therapy. 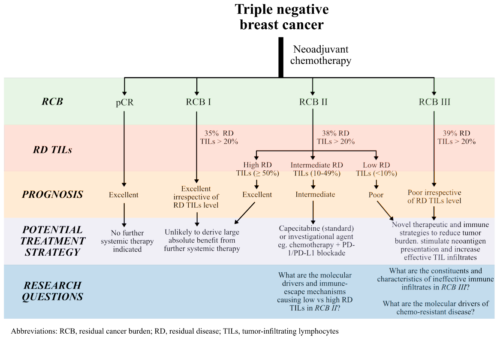 Herewith the link to both the RCB-calculator and the Open Access Guideline-paper to score TILs in the residual disease setting. 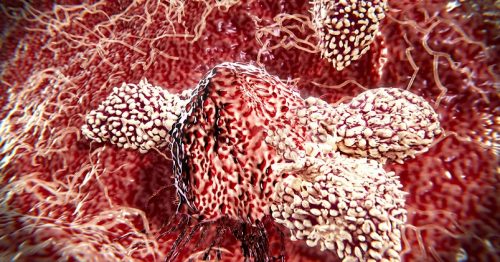 Natural killer cells are a type of lymphocytes which destroy cancer cells and other altered cells releasing cytotoxic granules.